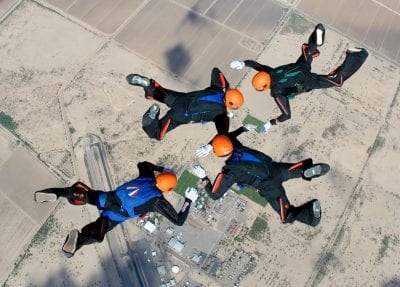 Another competition completed, Tomscat Trophy 2015. Videos have already been uploaded on our FB site. We hope you enjoyed them. Thunder ISR traditionally participates in this competition, it’s always good to have an opportunity to perform at a meet and see how we score. In general the jumps went rather well although as always we could keep everything much smaller. We know what we need to do for the next competitions, we need to work on ‘smaller’, less ‘sticky’, and ‘faster’. That’s where probably the focus of our training will be on in coming months, outside and in the tunnel.

We were close to become a member of the all 20+ outdoor club, however unfortunately round 5 with block 14 and 1 proved to be too slow for us to achieve this goal. Although we didn’t jump round 10 we would have definitely scored 20+ on that jump. We scored a 22.1 average, which probably would have been higher if we would have completed round 10. We now know we’re comfortably scoring 22+, so our current goal of 23+ will become in reach. Not bad for a bunch of weekend warriors.

Apart from the 4way performance, Grim had a great competition as well. Lately Grim has really improved his performance, spot-on exits, and turning with blocks to ensure judge-ability, and in this competition it really paid off. For his great camerawork, not only for Thunder ISR but also for team Gravity Abuse, Grim was awarded best cameramen of the competition.

The organization of the meet was again great, we had enough capacity, judging went smooth and timely (scoring completed quickly after the round, as Kurt has always advocated). We had the fasted jump plane of The Netherlands available.

Traditionally, following the completion of the competition Jos Arkes explained to especially the newcomers the history of the Tomscat Trophy which commemorates Remie Herder and Sjaak Strating who died in a jump plane crash in 1992.

Thunder ISR was requested to select one of the participating teams to be awarded the annual Stimulation Price. The team’s performance, effort, fun, attitude and ambition are important drivers for the selection of the team. But also how the team makes use of the available resources and time is an important selection criteria. Just before we were getting to intoxicated we carefully watched the jumps of many of the eligible team and selected Rookie class team Heartbeat. The stimulation price includes 30 minutes of free tunnel time offered by Indoor Skydive Roosendaal. Our team decided to provide free coaching on top of it.

We would like to thank the organization and other teams for a great competition. Please enjoy the video’s. Like always, please contact Paul for tunnel coaching. A number of tunnel camps have already been scheduled. Our strong advice to all teams, consider scheduling 2on2-coaching with us, it is a fast way to improve your team’s performance.

Some other nice articles about the Tomscat Trophy:
Article 1
Article 2
Article 3